Neural networks are all the rage these days. One mundane way of looking at neural networks is that they are a particular class of parametrized functions . What makes them useful is:

Neural networks made out of just relus (rectified linear units, relu(x) = max(0,x) ) and linear layers are particularly amenable to formal analysis. Regarding the weights as fixed (once a network has be trained), the complete neural network is a piecewise linear function. The regions where it is piecewise define are polyhedra (They are defined by the hyperplanes of the relu transitions as inequality constraints). Such functions are among those the most amenable to automated rigorous analysis.

Tasks that do have a precise spec are questionable areas for machine learning techniques, because how can you know that the network meets the spec? Also, one would suspect such a problem would have structure that you might be better off with a more traditional algorithmic approach.

However, there a a couple areas where one does have reasonable formal questions one might want to ask about a neural network:

This example of course is a complete toy. How often do you see 1-D input space neural networks? Not often I bet.
But it’s nice for a couple reasons:

Generally speaking, the combination of the capabilities of sympy and z3 give us access to some very intriguing possibilities. I’m not going to investigate this in detail in this post, but I are showing how you can convert a sympy derived polynomial into a python expression using lambdify, which can then be in turn used on z3 variables.

Here we build a very small 3 layers network using Keras. We use a least squares error and an adam optimizer. Whatever. I actually had difficulty getting nice results out for higher order chebyshev polynomials. Neural networks are so fiddly. 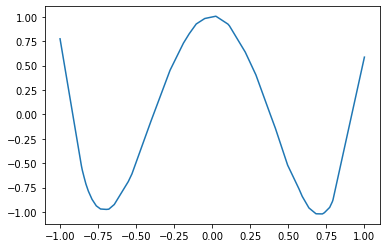 Our neural fit of the polynomial

And here we extract the weights and reinterpret them into z3. We could also have used z3 floating point capabilities rather than reals if you’re concerned about numerical issues. It was convenient to have my layers be different sizes, so that size mismatch would throw a python error. That’s how I found out the weights are transposed by default. The code at the end extracts a found countermodel and evaluates it. If you want to feel fancier, you can also use the prove function rather than an explicit Solver() instance. Saying you proved the neural network matches the polynomial to a certain tolerance feels really good. If you look at the graphs, the edges at 1 and -1 actually have pretty bad absolute error, around 0.5.