E-graphs are the data structure that efficiently compute with equalities between terms. It can be used to prove equivalences for equational reasoning, but also to find equational rewrites, which is useful for program transformations or algebraic simplification.

I got a hot tip from Talia Ringer on twitter about a paper and library called egg. Egg implements E-graphs as a performant generic library in Rust. The paper explains the data structure, a efficiency twist about when to fix its invariants, and shows some compelling use case studies. The claimed speedups over a naive implementation of E-graphs are absolutely nuts (x1000?!).

E-graphs compactly contain all the terms that are generated by a set of equalities and make it fast to perform the operation of congruence closure. Congruence is the property that $a = b \rightarrow f(a) = f(b)$ for all functions $f$. Functions take equals to equals. Congruence closure is taking an equivalence relation and closing it under this congruence operation, saturating the relation.

I decided to try parallel tracks of attempting to rebuild a version in Julia vs trying to build bindings to the implementation in egg. It is very unlikely I’ll beat the performance of egg, but native language flexibility is awful nice. Regardless I figured it’s a good learning experience.

SMT solvers like Z3 use E-graphs to reason about equality of uninterpreted functions. Understanding the E-graph structure has given me some possible insight into where I went wrong. Equality reasoning like this has been on my mind since I failed getting off-the-shelf provers to prove equations produced by Catlab.jl. So that’s sort of where I’m trying to head with this.

The actual E-graph data structure looks something like if a Union-Find and a Hash-Cons has a baby, so let’s talk about about those a bit.

Roughly how it works is that every element points to a parent in the partition. When you want to know what partition your thing is in, you follow the parent pointers up to a canonical element. While doing this you trickle the pointers upwards so the query will be faster next time. Eventually all the pointers in the partition will point directly to the canonical element with no indirection.

To merge two sets, set the parent pointer of one canonical element to the other.

That’s the rough sketch. There’s more in the wikipedia article https://en.wikipedia.org/wiki/Disjoint-set_data_structure. Julia has an implementation in the DataStructures.jl library https://juliacollections.github.io/DataStructures.jl/latest/disjoint_sets/ which I’m just going to use.

Now the question is, how can we extend this to compound terms that appear in syntax trees like :(g(f(a)))? The trick is consider each subterm as an atom in it’s own right, :a, :(f(a)), :(g(f(a))) and place these things into the disjoint set. This trick is significantly aided by the technique of hash-consing, which brings the structure and performance differences between compound terms and atoms closer in alignment.

Hash-Consing is a programming technique to convert tree data structures into a DAG data structure where all identical subterms are shared rather than copied. This has the advantage of faster processing and decreased memory usage for trees with a lot of repetitive subterms and fast equality comparison since you can check the unique identity of a term immediately rather than recursing down it. The way this is done by identifying each node with a unique id and maintaining a mapping of nodes to ids in a hash table. Whenever you create new nodes, you use smart constructors that first check if the node is already defined in the hash table. If it is, this canonical node is returned, otherwise the node is added to the hash table.

You can recursively convert a tree into it’s hash consed from by destructing it and reconstructing it with the smart constructors. The unique id may be the memory address where the node is stored or it may come from a counter being incremented every time you create a novel term.

The canonical reference on hash-consing is Type-Safe Modular Hash-Consing. Hash consing has been folklore for a very, very long time though. There is a reference in here to a paper by Ershov in 1958 for example. A really fun example in there is using HashConsing for a BDD implementation.

Another term sometimes used is “interned”. Julia’s Symbol is interned.

Each equivalence class needs to maintain

We will index into congruence classes with Id. Wrapping the Int64 in a struct should have no performance cost, and keeps things sane.

We need a structure to hold hash consed terms of our language. AutoHashEquals.jl makes it so hash and == use a structural definition.

An equivalence class is a set of nodes. We also need to store parents of these nodes in order to make congruence closure and hash cons updating fast.

Finding the root class or querying whether in_same_set for an Id just passes off the query to the union find.

We can canonicalize terms so that the Id arguments only point to the root class.

We can add new terms by finding if they already exist in the hashcons. If so it, it does nothing. But if not, we need to make a new EClass for this term to live in. This is the only way new EClasses are made. It is important to maintain the hashcons correctly and canonicalize so that we don’t accidentally create a new EClass for a term that should already be in another EClass.

Alright. Here is where stuff gets hairy. We want to union two equivalence classes.

This code might be right. Lemme tell ya, I’ve had versions only subtly different that weren’t right. So I dunno. Buyer beware.

Finally the last big chunk is rebuild!. This function works through the dirty_unions array and fixes parent nodes and propagates any congruences.

Here’s some helper functions to build constants and terms

and some other helper functions to help draw the EGraph, which is pretty crucial

A simple toy problem is to use equalities like $f^n(a) == a$. What this does is put a loop in the EGraph. 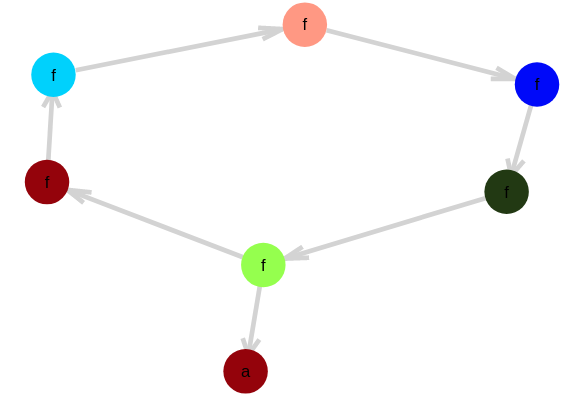 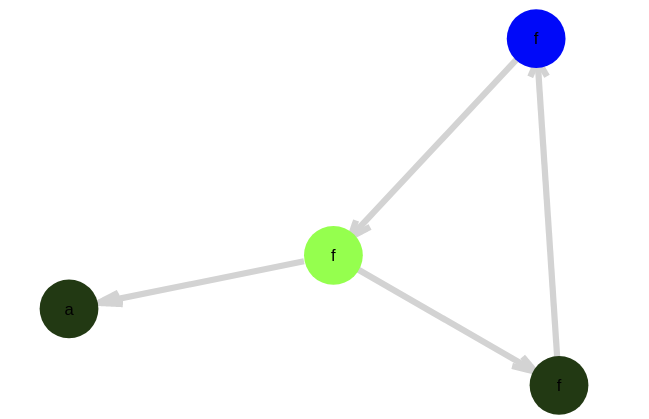 And then if additionally we assert a prime number of applications of f, we reduced the loop of nodes to a single equivalence class 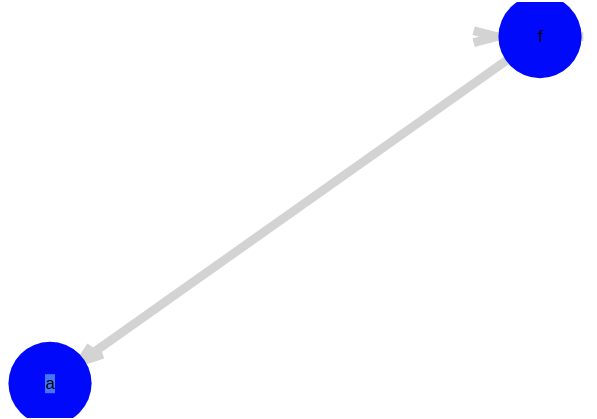 We’ve only just begun. To do anything really fun, we need to implement pattern matching over the E-graph (EMatching).